By Adi Sankara Bhagavat Pada
Mudha karatha modhakam, sada vimukthi dayakam,
Kaladaravathamsakam, vichithra loka rakshakam,
Anayakaika nayakam vinasithebha daithyakam,
Nathashubha pranasakam, namami tham vinayakam., 1
I salute that remover of obstacles,
Who has modakas in his hand,
Who always bestows salvation,
Who wears a part of moon on his head,
Who protects this world which is varied,
Who is the leader of those who cannot be lead,
Who is the cause of destruction of asuras,
And who destroys all things which are not good.
Nathetharathi bheekaram navodhitharka bhaswaram,
Namath surari nirjaram nathadhikapadhugdharam,
Sureswaram Nidheeswaram Gajeswaram Ganeswaram,
Maheswaram thamasraye parathparam nirantharam., 2
I bow before that great Lord permanently,
Who creates fear in the enemies of his devotees,
Who sparkles like the just risen sun,
Who is saluted by Gods and Asuras
who destroys obstacles of his devotees,
Who is the God of all devas,
Who is the God of all wealth,
Who is the God of all elephants,
And Who is the leader of the army of Lord Shiva.
Samastha loka sankaram, nirastha daithya kunjaram,
Daretharodaram varam varebhavakthramaksharam,
Krupakaram, Kshamakaram, Mudhakaram, Yasaskaram,
Namaskaram Namaskrutham namaskaromi bhaskaram., 3
I bow to that Ganapati who shines like the Sun,
Who bestows peace to all the worlds,
Who removed the Gajamukhasura from this world
Who has a very big paunch,
Who has an elephant-face which blesses,
And who is the one who shows kindness
Who is patient,
Who is full of blessing,
And who showers great fame,
To those who salute Him.
Akinchanarthimarjanam chiranthanokthi bhajanam,
Purari purva nandanam surari garva charvanam,
Prapancha nasa bheeshanam danamjayadhi bhooshanam,
Kapola dhana vaaranam Bhaje purana varanam., 4
I salute the very ancient elephant-god
Who destroys the wants of the have nots,
Who has been worshipped since ancient times,
Who is the eldest son of the lord who destroyed cities,
Who eats away the pride of the enemies of the gods,
Who is awesome at the time of final deluge,
Who wears serpents like Dananjaya as ornaments,
And who is fierce like the elephant in rut.
Nithanta kanthi dantha kantha manthakantha kathmajam,
Achinthya roopamantha heena mantha raya krunthanam,
Hrudanthare nirantharam vasanthameva yoginaam,
Tham eka dantha meka meva chinthayami santhatham., 5
I always meditate only on that God with single tusk,,
Who is ever lustrous tusk is very pretty,
Who is the son of Lord who killed the god of death,
Who has a form beyond ones imagination,
Who is endless,
Who tears asunder all obstacles,
And who dwells forever in the heart of Yogis,
Like the season of spring.
Phalasruthi
Maha ganesa pancha rathna maadharena yo anvaham,
Prajalpathi prabhathake hrudhi smaran ganeswaram,
Arogadhamadhosadham susahitheem suputhratham,
Samahithayurshta bhoothi mapyupaithi sochiraath.
He, who remembers with respect every morning,
These five gems of the great Lord Ganapati,
and who meditates in his heart the leader of ganas,
Will soon be blessed with a healthy life,
Free of all problems, endowed with great peace
Great sons, longevity and spiritual and physical wealth.
Translated by P. R. Ramachander
Posted by Pradeep Singh at 8:45 AM No comments: 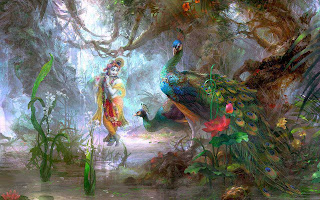 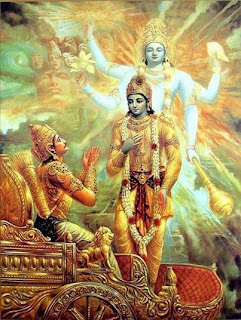 Sruti & Smriti
The Knowledge of Vedic literature is primarily divided in two types, Sruti and Smriti. The Veda is called sruti and is the highest authority. and are timeless that is beyond time.Other texts are called smritis, and they derive authority from the sruti and depend on Desha Kala Parasthithi (space ,Time ,Circumstances)
Sruti is apaurusheya (eternal and authorless), and smritis are the words of seers.
Sruti श्रुति in Sanskrit
“hearing, listening”, often spelled shruti or shruthi, is a term that describes the sacred texts comprising the central canon of Sanatana Dharama Hinduism and is one of the three main sources of dharma and therefore is also influential within Hindu Law.
These sacred works span the entire history of Hinduism, beginning with some of the earliest known Hindu texts and ending in the early modern period with the later Upanishads. its literature differs from other sources of Hindu Law, particularly smṛti or “remembered text”, because of the purely divine origin of śruti. This belief of divinity is particularly prominent within the Mimamsa tradition. The initial literature is traditionally believed to be a direct revelation of the “cosmic sound of truth” heard by ancient Rishis who then translated what was heard into something understandable by humans.
Both śruti and smriti represent categories of texts that are used to establish the rule of law within the Hindu tradition. However, they each reflect a different kind of relationship that can be had with this material. Śruti is solely of divine origin and contains no specific concepts of law. Because of the divine origin, it is preserved as a whole, instead of verse by verse. With śruti, the desire is more towards recitation and preservation of its divine attributes and not necessarily towards understanding and interpreting the oral tradition like that found in smṛti.
textual nature of Śruti
Rig-Veda (hymns recited by the hotar)
Yajur-Veda (hymns recited by the adhvaryu)
Sama-Veda (hymns recited by the udgatr)
Atharva-Veda (a collection of ancient spells and charms,brahma )
The liturgical core of each of the Vedas are supplemented by commentaries on each text which all belong to the śruti canon:
Brahmanas
Aranyakas
Upanishads
Smritis could be broadly classified as
Vedangas :-subjects required to understand various aspects of the Veda
Upavedas :-arts and sciences
Upangas :-understanding of dharma and debating it
Darsanas :-Windows to truth
other shastras (treatises, guidelines)
Types of Smritis
Based on the nature of knowledge, the smriti literature is of two types: one that expounds sastra and one that outlines codes of conduct. While texts like Manusmriti and Puranas contain both types of knowledge, there are specific texts for specific purposes. Texts like Paniniya Astadhyayi (Vyakarana), Gautama Sutras (Nyaya), Tarka Samgraha (tarka) expound specific sastras. Dharma Sutras and similar literature expound codes of conduct, judiciary etc.
Posted by Pradeep Singh at 8:21 AM No comments: