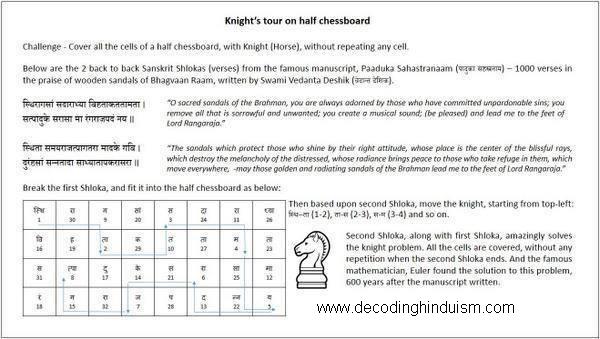 The knight's tour problem is the mathematical problem of finding a knight's tour. Creating a program to find a knight's tour is a common problem given to computer science students
The earliest known reference to the knight's tour problem dates back to the 9th century AD. In Rudraṭa's Kavyalankara(5.15), a Sanskrit work on Poetics, the pattern of a knight's tour on a half-board has been presented as an elaborate poetic figure ("citra-alaṅkāra") called the "turagapadabandha" or 'arrangement in the steps of a horse.' The same verse in four lines of eight syllables each can be read from left to right or by following the path of the knight on tour. Since the Indic writing systems used for Sanskrit are syllabic, each syllable can be thought of as representing a square on a chess board. Rudrata's example is as follows: