Genetic measurements indicate that the ape lineage which would lead to Homo sapiens diverged from the lineage that would lead to chimpanzees (the closest living relative of modern humans) around six million years ago. It is thought that the Australopithecine genus, which were likely the first apes to walk upright, eventually gave rise to genus Homo. Anatomically modern humans arose in Africa about 200,000 years ago, and reached behavioural modernity about 50,000 years ago. 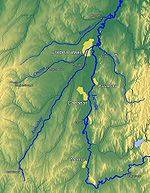 Modern humans spread rapidly from Africa into the frost-free zones of Europe and Asia around 60,000 years ago. The rapid expansion of humankind to North America and Oceania took place at the climax of the most recent Ice Age, when temperate regions of today were extremely inhospitable. Yet, humans had colonized nearly all the ice-free parts of the globe by the end of the Ice Age, some 12,000 years ago. Other hominids such as Homo erectus had been using simple wood and stone tools for millennia, but as time progressed, tools became far more refined and complex. At some point, humans began using fire for heat and cooking. They also developed language in the Palaeolithic period and a conceptual repertoire that included systematic burial of the dead and adornment of the living. Early artistic expression can be found in the form of cave paintings and sculptures made from wood and bone, showing a spirituality generally interpreted as animism, or even shamanism. During this period, all humans lived as hunter-gatherers, and were generally nomadic. Archaeological and genetic data suggest that the source populations of Paleolithic hunter-gatherers survived in sparsely wooded areas and dispersed through areas of high primary productivity while avoiding dense forest cove”
(wiki, link provided at the end of the article)
Map of the Creator shows world 12 Million years ago.Dashka Map
Map of the Creator.
and Human written History is said to have begun around 8000 years ago.
Dashka Stone Map,Russia
Dashka Stone Map.
‘The Neolithic Revolution, beginning about 8,000 BCE, saw the development of agriculture, which drastically changed the human lifestyle.Mesopotamia is the site of the earliest developments of the Neolithic Revolution. It has been identified as having “inspired some of the most important developments in human history including the invention of the wheel, the planting of the first cereal crops and the development of cursive script, Mathematics, Astronomy and Agriculture'(wiki)
A Map ,called as The map of the Creator as found in Russia.
It is the Dashka Stone Map.
It is a 3 D Version .
‘
The Dashka stone is a unique artifact of unknown origin with (allegedly) a three-dimensional map of the Ural region. The stone was found in the village of Chandra in Bashkortostan, Russian Federation. According to researchers, the Dashka Stone constitutes evidence of the existence of an ancient civilization with high technical and cultural levels. If it is true it can also serve to confirm the views of creationists on the civilization of people before and shortly after the Global Flood.

There are many ancient legends in Bashkortostan of a strange plates with ornaments. In 1921, historian Vakhrushev, who visited the Chandar mentioned them in his report. He reported about six boards, but four have been lost. And the sources of the nineteenth century states that there were two hundred boards.
A stone slab measuring 1.5 meters by one meter and over 20 cm in thickness was brought to scientists at Bashkir state university, headed by the rector, Professor, Doctor of Physical and Mathematical Sciences Alexander Nikolayevich Chuvyrov.
They obtained in 1999 a three-layer plate, which, according to Chuvyrov, was made by artificial means.
The first layer of 18 centimeters is cement or ceramic on the basis of dolomite.
The second layer of about an inch – enriched with silicon, to give a picture strength. Microhardness of slightly less than that of corundum.
Third porcelain layer several millimeters. Perhaps, in order to create diffused light, to illuminate the card.
Uralskiy region with similar image
It is noted that at the plate allegedly plotted map showing the location of Ufa elevated to the modern city Meleuz. This image is a relief, according to modern concepts, you can get it from cosmic heights. It is alleged that on the map Dashka stone marked waterworks system and channel length of 15,000 kilometers, dams, 12 dams up to a mile wide and powerful water intakes. Rhomboid are designated areas – they were far from the channels. According Chuvyrova – so runways. According Chuvyrova: those who then lived and built, either flew or used the water route, since no roads are on the map.
The map also has numerous inscriptions. It is believed that this hieroglyphic-syllabic language of unknown origin. What the inscriptions say is currently unclear.
Some researchers claim that the stone is not artificial, but a purely natural origin, and the system of cracks has nothing to do with the scheme of the rivers of Bashkortostan. A layer of one mineral over another is not something surprising. There are stones, for example, with a layer of quartz on top. There are also “Moonstone” and “solar stone” with the same system of cracks. The constancy of angles proves just natural, pure crystallographic effect.
Source. http://creationwiki.org/Dashka_stone
Now consider these facts.
The Four Yugas
4 charaṇas
(1,728,000 solar years)Satya Yuga
3 charaṇas (1,296,000 solar years)Treta Yuga
2 charaṇas (864,000 solar years)Dvapara Yuga
1 charaṇas (432,000 solar years)Kali Yuga.
1.No other text in the world describes such vast stretches of Time.
2.Daksha Prajpathi was the first Human.
According to Hindu legend, Daksha is one of the sons of Lord Brahma reside in North West, who, after creating the ten Manas Putras, created Daksha, Dharma, Kamadeva and Agni from his right thumb, chest, heart and eyebrows respectively.
3.Thiruvannamlai, Tamil Nadu is 3 Million Years Old.
4.Thirupathi, Andhra Pradesh, 2100 Milion Yeras old
5..Daksha resided in the North est of India.
6.Krishna’s son Pradhyumna founded Port Baijn in Russia.
7.Indra’s Vaikanasa Theertha was in Russia.
8.Russia was called Sthree Varsha, Kingdom of Women.
9.Lake Baikal was Vaikanasa Theertha.
10. Arkaim city in Russia as built on the Rig Vedic mandala Design and was called the Swastika City.
11.Daksha Hid in Antarctica, fearing Lord Shiva’s wrath.
12.Swasthik Mark was found submerged in Antarctic Ice.
Considering these facts it is safe to postulate that Daksha Created the 3 D Map of the Creator.
It is interesting to note that Daksha is called the Creator of mankind in Hinduism.
Source Ramani's blog
Posted by Decoding Hinduism at 4:00 PM