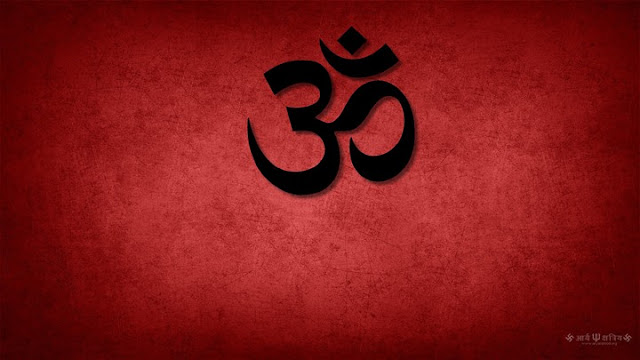 Purusha Suktam - in sanskrit with meaning - from Rig Veda 10.90

Meaning:
1.1: The Purusha (Universal Being) has Thousand Heads, Thousand Eyes and Thousand Feet (Thousand signifies innumerable which points to the omnipresence of the Universal Being),
1.2: He envelops the World from all sides (i.e. He pervades each part of the Creation), and extends beyond in the Ten Directions ( represented by Ten Fingers ),

Meaning:
2.1: The Purusha is indeed All this (Creation) in essence; That which existed in the Past, and that which will exist in the Future,
2.2: Everything (i.e the whole Creation) is woven by the Immortal essence of the Great Lord (Purusha); by becoming Food of which (i.e. by getting consumed in Whose Immortal essence through surrender) one transcends the gross world (and becomes Immortal).

Meaning:
3.1: The Purusha is Greater than all the Greatness (which can be expressed by words),
3.2: His One Foot has become all these (visible) Worlds, and His Three Feet rests in the Immortal World of the Transcendence.

Meaning:
4.1: The Three Feet of the Purusha is raised high Above (in Transcendental Realm), and His One Foot becomes the Creation again and again.
4.2: There, in the Creation, He pervades all the Living ( who eats ) and the Non-Living ( who does not eat ) beings.

Meaning:
5.1: From Him (i.e. the Purusha) was born the Virat; (the Virat came into being) from the presence of the Shining Purusha (Who remained as the background or substratum of Virat);
5.2: He (i.e. the Virat) created the Earth, by manifesting Her from His own being as substratum.

Meaning:
7.1: The First Divine Men were created as the Holy Water sprinkled with the Kusa Grass in that Yagya (Sacrifice of Creation).
7.2: The First Divine Men were the Sadhya Devas and the Rishis, Who were created by Him, the Deva (the Shining One, referring to Virat), Who performed the Yagya. (These Rishis were not human but divine Rishis like Saptarshis created directly by Virat).

Meaning:
8.1: From the Complete Offering of His (i.e. Virat's) Yagya (Sacrifice of Creation) was obtained Ghee mixed with coagulated Milk, ...
8.2: ... which (i.e. the Ghee and Milk) are (the created) Animals, both of Air (Birds) and of Forests (Wild Animals) and Villages (Domestic Animals).

Meaning:
9.1: From the Complete Offering of His (i.e. Virat's) Yagya (Sacrifice of Creation) was born the Rig Veda and Sama Veda,
9.2: The Chandas (Vedic Meters) were born from Him, and the Yajur Veda was born from Him.

Meaning:
12.1: The Brahmanas were His Mouth, the Kshatriyas became His Arms,
12.2: The Vaishyas were His Thighs, and the Shudras were assigned to His Feet.

Meaning:
14.1: His Navel became the Antariksha (the intermediate Space between Heaven and Earth), His Head sustained the Heaven,
14.2: From His Feet the Earth (was sustained), and from His Ears the Directions (were sustained); in this manner all the Worlds were regulated by Him.

Meaning:
15.1: By making Seven Enclosures with Three times Seven sacrificial Firewood, ...
15.2: ... the Deva (the Shining One referring to Virat) in that Yagya (Sacrifice of Creation), bound the infinite expanse of the Purusha as (apparently) finite living beings (Pashu).