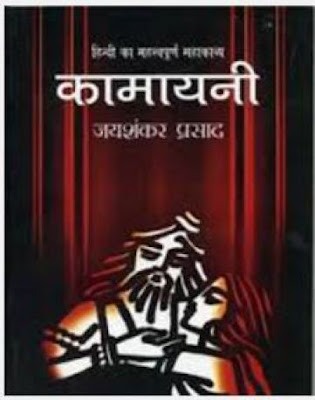 Kamayani by Jaishankar Prasad is a Hindi classic poem and is one the best literary works written in modern times in Hindi Literature. Jayshankar Prasad is Chhayavaadi Hindi poet. Kamayani was first published in 1937 and was one of the most popular Hindi poetry in that era. It is based on the story of Manu, the only man who survived from after a pralay yug who was emotionless, however he later started to get involved in emotions, thoughts and actions. And the emotions that Manu poured on characters are Shraddha, Ida, Kilaat and many others.
Kamayani by Jaishankar Prasad has tried to depict the thoughts, emotions and actions of humans.There is a chapter for every emotion and thoughts in Kamayani hindi book pdf. Explaining his metaphorical presentation of Vedic characters, the poet said:“Ida was the sister of the gods, giving consciousness to entire mankind. For this reason there is an Ida Karma in the Yagnas. This erudition of Ida created a rift between Shraddha and Manu. Then with the progressive intelligence searching for unbridled pleasures, the impasse was inevitable. This story is so very ancient that metaphor has wonderfully mingled with history. Therefore, Manu, Shraddha and Ida while maintaining their historical importance may also express the symbolic import. Manu represents the mind with its faculties of the head and heart and these are again symbolized as Faith (Shraddha) and Intelligence (Ida) respectively. On this data is based the story of Kamayani.”
Download Kamayani Of Jayshankar Prasad In Hindi
It is based on LINK
Posted by Pradeep Singh at 7:27 PM