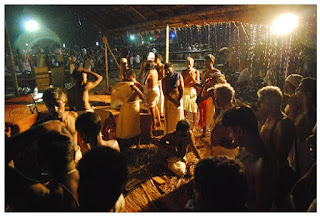 The sole picture of ancient India that arises when one tries to imagine the Vedic era is that of few white bearded rishis sitting in front of a pit and offering oblations to the fire. Frankly, our mythological serials in the 1990s are also responsible for creating such a picture that Yagyas was a sort of ritual. And how can we forget? Our very great Communist historians are the main players in the character assassination of our ancestors and branding them as ritualistic, blind faith affected people.


Yagya, for that matter,is a system developed for pleasing the Devas but also has many variants including a Yagya for cooking and a Yagya for all 16 sanskars of Hindus.In a Yagya, we have to offer an oblation, let it be ghee,milk, cakes of cereals, Soma,etc. And this oblation is not done just by sitting there. An important condition for this is chanting of the Vedic mantras, Samantrakam समन्त्रकं,with the Mantas, as they call it. These Mantras are well documented in the Rigveda. 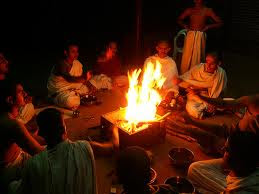 The Englishmen translated the word Yagya as 'sacrifice' which in itself is a blatant mistake. Yagya was never meant for any sacrifice of animals.It was a simple system of pleasing the Gods into which animal sacrifice found place, which is no doubt not a right thing. But branding the whole system as an outrageous way of pleasing the Gods, is itself outrageous.If one really tries to see the intricacies of a Yagya, then one will come to know the amount of perfection and the amount of brains that have gone in framing the smallest of things. Take for example, the fire in the Yagya. Now one would imagine that the rishis would be bringing some random logs of wood and burning them. But instead, the fire is of a particular wood and that too of 3 types- Garhapatya, Ahavaniya and Dakshinagni. (गार्हपत्य, आहवानीय, दक्षिणाग्नि ). Even the fire altar's dimensions, it's height from the ground,etc are fixed and find place in the Apastamba and Baudhayana Sulva Sutras.

And even the Yagya does not take place without some specially qualified people who conduct it- The Hota, Udgata and the Adhvaryu. The Hota is skilled in Rigved and recites the mantras line by line. The Udgata is a Samved expert who recites the same mantras but with a musical tune called Chhanda whereas the Adhvaryu is an expert in Yajurved who knows about the small technicalities of a Yagya and also controls the Yagya till it ends.

Samveda in particular has a relation with this whole Yagya system. Because due to this system, the whole stream of Indian classical music was developed. Mantras in a Yagya cannot be recited as they are since they are too many and it sounds boring. Hence was felt the need to give a rhyme to these mantras which gave rise to Samved. Samved has almost all it's verses common to Rigved but are given a particular rhyme called Chhanda. Different Chhandas include Gayatri, Trishtup, Anushtup, Brihadrati,etc.
For example there are 3 verses A,B,C and I want to multiply them to 15 verses. So I sing them as-
A A A B C    A B B B C   A B C C C. This forms one chhanda or style of reciting.

This also proves the brilliant practice of the then Brahmins in reciting thousands of these mantras, sometimes overnight. And even in this overnight chanting, certain adjustments were made.Now obviously I would fall asleep while chanting these mantras overnight. So what to do? Simple- Sit on a swing and keep swinging overnight while chanting the mantras !!!! Simple adjustments assimilated into a complex culture.Returning to Samved, we find that for chanting these verses, our 7 Swaras were developed- Sa Re Ga Ma Pa Dha Ni Sa- although we find them in different names. The reader would be surprised to know that a separate UpaVeda of the Samved called the Gandharva Ved exists which specifically deals with music and it's different Ragas and Talas. So much of advancement, and that too originating for the sake of singing the mantras properly in a Yagya !!!!! And with singing comes dancing. There is a ritual that if the person for whom the Yagya is conducted is rich, he can bring his 50 Dasis who with pots on their heads can dance beautifully around the Yagya altar.

Agnihotra is a yagya done twice in a day
A special kind of Yagya called as Atiratra is done for bringing rains. It is a 12 day ritual. This was successfully performed in Panjal, Kerala in 1975 as well as in 2011.


From  Ashutosh Kulkarni
Posted by Pradeep Singh at 5:34 PM