Upanishads are the theological texts of Hinduism which contain the most basic philosophy on which the Hindu thought is based. Along with the Bhagvat Geeta, they form the core of the Hindu understanding of the universe. They impart a  philosophical and spiritual angle to the various Vedic rituals and hence these texts have multilevel interpretations. A scholar can go deep and deep but still he will find the same verses will have infinite meanings that reflect upon the keen sense of metaphysical understanding that our ancestors had.
The most heard quotes from Hindu philosophy are none but Upanishadic verses right from Aham Brahmasmi, Tatvamasi to Satyameva Jayate.

Each of the 4 Vedas i.e Rigveda, Yajuveda, Samaveda and Atharvaveda are divided into 4 parts i.e


Thus Upanishads themselves are a part of Vedas. There exist more than 200 Upanishads ranging from few pages to fat books. The list of 108 various Upanishads occur in the Muktikopanishad where the names of almost all of the major Upanishads occur.
The most famous Upanishads of Hindu thought are Brihadaranyaka, Chandogya, Aitareya, Isha, Prashna, Mundok, Kena, Shwetashwatara, etc.

Another logical conclusion is that every Veda has it's own Upanishad which propounds the contents of that particular Veda. Here is a small classification of Upanishads according to the Vedas they belong to -

The Vedic culture mainly comprised of rituals which were basically established to please Gods, live longer or to get priceless gifts from Gods. The Yagyas that were conducted mainly dealt with rituals which included fire, horse, oblations,etc. Now these Yagyas cannot be conducted silently. Thus verses were composed by different families of rishis for their particular Yagyas which were to be recited. This gave rise to a large number of Yagyas for different purposes. All of this is mechanical and ritualistic worship.

Human mind is always in the pursuit of knowing the deep secrets of the universe and what lies in the infinite space around us. Just as science and rituals are the food for your brain, philosophy and spirituality is the food for your mind. The rishis came to know that a level of perfection and ultimate pleasure can be attained through meditation and becoming one with the Supreme.With time, the rishis started focusing on some basic questions of our existence. Their inborn curiosity led them to find as to who is controlling all that is around us. Consequently, the deep meanings of Vedic verses and the various rituals was taken into account. To quote an example, the Upanishads discuss the deep meaning of why a horse is tied to a pole and faces east during a Ashwamedha Yagya. The consequent result was a concept called "Brahman" or the supreme being. This Brahman is what is driving everything around us.  It is the chemical X that is present in every bit of the universe that makes it function what it is destined to.

Without going much into philosophy, let's focus on the consequences of this. With a new style of thinking taking shape, the same rituals began to be viewed with completely different angle. The knowledge began to be divided into two types-  Gyankanda and Karmakanda literally meaning philosophy and rituals way of understanding things. Consequently, knowledgeable people started conducting debates about the in depth understanding of the Brahman.  Kings began conducting such debates. Handsome awards were given to the winner. The conversations of such people were recorded and further compiled into scriptures which came to be known as Upanishads. It should be noted that philosophy has existed from the start of civilization but it came out in full force when Upanishads were compiled as texts dealing only with philosophy. These scriptures were compiled, assigned a meter and faithfully transmitted orally. Having such a precious doctrine in them ,these scriptures were declared as Shrutis i.e scriptures to be heard and transmitted where not even a word is to be changed.

The brahmins belonging to that particular branch of Vedas were taught that particular Upanishad. But with time, all these scriptures were made open to all and they got a common name "Vedanta" literally meaning the end point of Vedas.

Authorship of the Upanishads is a bit complicated issue since very few names are mentioned. But from what information we get, majority of the authors were Brahmins and Kshatriyas. The Varna system being flexible then, even a Shudra was made a Brahmin based on his knowledge. There are many instances where the kings themselves outwitted the Brahmins showing that knowledge was not the sole premise of Brahmins. Kings like Janaka Videha, Ajatshatru Kashiraj, Ashwapati Kekaya,etc won debates with Brahmins who had come to teach them. Shudras like Satyakama Jabala won many debates. Another interesting feature is that we find mention of two women namely Gargi Vachaknavi and Maitrayee who also used to participate in the debates. This shows the high social ranking of women in those times.

Now coming to the main point- geography of Upanishads.
If we look at the names of different places mentioned and the kings belonging to different kingdoms, the geography can be broadly classified into Kuru- Panchala region and Kashi-Videha region. In the Kuru-Panchal region, we have kings like Jaivahan Panchal and rishis like Uddalaka. Uddalaka is said to have roamed in the Kuru region to gather Brahmins for a debate. The epicentre for philosophy was of course, the Kashi-Videha region with it's most powerful theologist, Yajnavalkya. He was the one who had defeated almost all people from different parts of Bharat. He was the chief theologist in Videha's king Janaka's court. Because of him, Videha had emerged as an important center for philosophy.
In addition, in the Brihadaranyaka Upanishad, we have a reference of Indradyuma Bhallaveya having learnt from king Ashwapati Kekaya, the father of Ram's step mother Kaikeyi. Regions like Gandhara are also mentioned.
Upanishads were composed. Majority of the Upanishads were composed during, just before and just after the era of Rama and king Janaka of Videha. As I have said earlier, king Janaka used to host debates in his kingdom where Yajnavalkya was his chief theologian. Most of the names, thus, appearing with Yajnavalkya become his contemporary. We would see how this is the case as we begin placing the Upanishads.

All the placing of rishis and sages is done with respect to king Janaka who was one generation before Shri Rama.

Kaushitaki Upanishad
The composer of this Upanishad is Kahod Kaushitaki. He was the contemporary of king Janaka and Yajnavalkya. Brihadaranyaka Upanishad  ( 3.5) has a conversation between Yajnavalkya and Kahod Kaushitaki. Plus, Mahabharata ( 3.132 and 133) mention the story where Janaka had organized a debate in his Videha kingdom where Kahod's son Ashtavakra and Ashtavakra's mama Shvetaketu had gone there to debate with Bandi, the son of Varuna. It also gives the information of Shvetaketu's family as Aruni --> Uddalak --> Shvetaketu .
This would be clear by the following -

This places the Kaushitaki Upanishad one generation prior to Shri Rama.

Aitareya Upanishad
This Upanishad is composed by Mahidasa Aitareya, who belonged to a lower caste but was elevated to the post of a Brahmin. He has also composed Aitareya Brahmana, Aitareya Arnyaka,etc. But late additions have also been made to his Brahmana and Aranyaka. We take the help of Sankhyayana Grihya Sutra ( 4.10 and 6.1). It gives the list of teachers of that scripture. This list starts from Kahod Kaushitaki --> Suyajna Sankhyayana --> Mahidasa Aitareya. Apart from these, Ashvalayana Grihya Sutra ( 3.4) inserts Paingya in between Kahod and Suyajna.  See the following 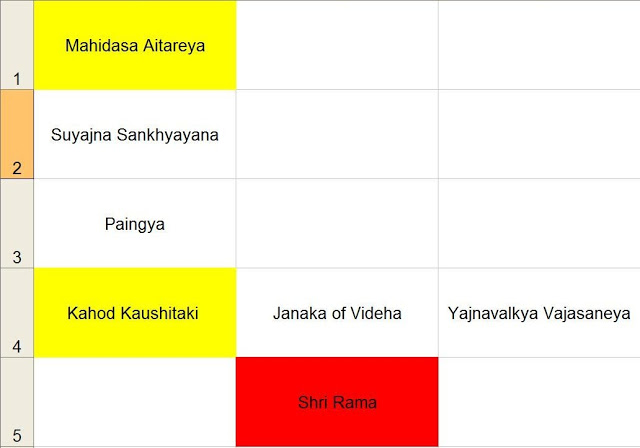 Brihadaranyaka and Chandogya Upanishad These are very easy to place since majority of the people they talk are having a conversation with Yajnvalkya in the court of king Janaka of Videha. If you place the different kings and rishis listed in the these two Upanishads, we conclude that some of them were before Yajnavalkya, some contemporary who had conversation with him and others are later than him. This shows that the conversations were recorded and later on compiled into an Upanishad.
Another way of placing these two Upanishads is by the reference of Indradyumna Bhallaveya. He had a debate with Yajnavalkya. Indradyumna claims in Chandogya Upanishad (5.11) and Shatpatha Brahmana (10.6.1.1) that he was counselled by Ashwapati Kekaya which Ramayana mentions to be the father of Kaikeyi, Rama's step mother. So these two Upanishads can indeed be placed in the Ramayanic era.
Since we have placed these Upanishads, we can make a list of names whom are either contemporary or 1-2 generations before/after these Upanishads. All the names appear in Brihadaranyaka (BU) and Chandogya (CU) and Shatapatha Brahmana (SB) -


Besides, these Upanishads also mention Kahod Kaushitaki, Ashtavakra, etc who also were contemporaries of Yajnavalkya.
As we have seen, Mahidasa Aitareya was 4 generations before Shri Rama. Chandogya being contemporary to Shri Rama, it mentions that Mahidasa Aitareya lived for 116 years - CU (3.16.7). It also mentions the story of Satyakama Jabala who existed some generations after Yajnavalkya thus confirming my proposition that these two Upanishads are compilation of dialogues which were compiled later.

Brihad Jabala Upanishad
As the name suggests, the composer is Satyakama Jabala. He was a Shudra who was taught by his teacher Haridrumata Gautama. His story appears in Chandogya  (4.4.3).  Now, the Brihadaranyaka Upanishad (6.3.7) also gives a list of teachers from Uddalaka till Satyakama Jabala. Chandogya (4.10) adds another name of Upakoshala Kamlayana as the pupil of Satyakama Jabala. Following will demonstrate it - 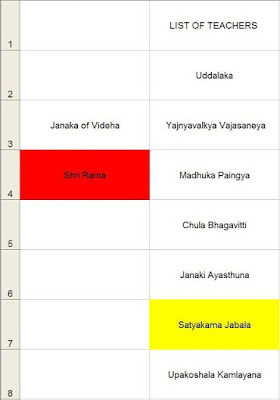 This places the Brihad Jabala Upanishad at 3 generations after Shri Rama. This is also coroborated by a reference to a dialogue between Yajnavalkya and king Janaka that is quoted in Brihad Jabala (7).

Prashnopanishad
This is a relatively late Upanishad. The placing becomes clear by one reference to king Hiranyanabha of Ayodhya where the rishis had gone to interact with him. PU (6.1)
The rishis who were present were Sauryayani Gargya, Shaivya Satyakama.,Sukesha Bharadvaja, Kaushalya  Ashvalayana, Kabandhi Katyayana, Bhargava Vaidarbhi.
King Hiranyanabha was 18 generations after Shri Rama.