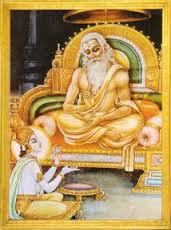 A peculiar feature that any keen reader will observe in our literature is the Vishwamitra-Vasishtha relation. Whether it's Mahabharata or Ramayana, this pair is always present.

But due to excessive lack of vision, our 'great' historians generally confuse these and consider them as existing only in a single era thus ending up concluding that the Indian scriptures are thoroughly confused.

According to me, there were 11 Vasishthas and 4 Vishwamitras. There existed many other Vasishthas and Vishwamitras but these mentioned are related to popular legends. I will talk about each of them. Their position is explained relative to the Ikshvaku family of kings where Vaivasvat Manu is at number 1, Rama at number 65 and Brihadvala ( Mahabharata era) at number 97.
But first, let me clarify on the use of word 'eponymous'. It means the name on which an entire tribe or group is named. So an eponymous Vasishtha or an eponymous Vishwamitra is mentioned, it means we are talking of the 'original' rishi from whom the tribe started.