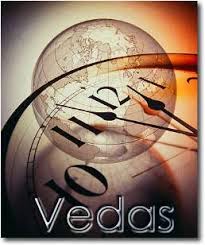 Vedas And The Adhyatmik Aspect of Devata :
======= Adopted from ' Works of Swami Rama Tirtha '
The religion of Shruti makes every act, feeling, and thought of our life a yajna, an offering to the devas. Deva in the Vedantic language means the power-giving life and light to the different faculties; and the deva or devata of a faculty, indriya or sense, implies that faculty, indriya or sense taken cosmically. (Cf. Adhyatmik and Adhidaivik)
The devata of chakshu (or sight) is the sight of all beings, called Aditya and only symbolized by the material Sun or the world's eye.
The devata of hands is the power in all hands and is named Indra.
The devata of feet is the power in all feet styled Vishnu, and so on. Thus true yajna or sacrifice to the devas means offering or dedicating my individual faculties and senses to the corresponding cosmic powers.

Offering to Indra would mean working for the good of all hands in the land.
Offering to Aditya would mean realizing the presence of God in all eyes; honouring and respecting all eyes; offering no eyes by unworthy conduct; presenting smiles, blessings , love and kindness to whatsoever eyes may turn upon you; and offering your eyes the All - Sight with such a devotion that the egoistic claim being entirely given up, the All - Light Himself may shine through your eyes.
Sacrifice to Brihaspati is dedicating my intellect (thoughts) to all the intellects in the land or thinking for the good of the land as if myself were none else than my countrymen, merging my interests in the interests of the people and exulting in their joy.
In short yajna implies realizing in active practice my neighbour to be my own self, feeling myself as one or identical with all, losing my little self to become the self of all. This is crucifixion of the selfishness, and this is resurrection of the All Self. One aspect of it is usually styled bhakti and the other is called jnana.
The people from whom these Vedas sprang are called Rishis. But they are not the authors. The word Rishi merely means the seer of divine light, the seer of divine truth. Again, in other parts of the Hindu Scriptures, it is stated that all the Vedas are like a tree which sprang from the seed known as OHM, OHM, OHM. This is called the seed from which the tree of the Vedas sprang.
How can we reconcile this idea with the other, that the Vedas came from the people who did not write them, bat sprang spontaneously as light emanates from a lamp or fragrance proceeds from a rose ?
The two ideas are reconciled in this way that those people who want to get a higher inspiration, those people who wanted to acquire that God - vision, who wanted to rise above the egoistic, personal, little, limited, local consciousness of self, they got the inspiration and light through the chant of OHM, OHM. Now it is not the mere chant by the throat; it is something else also. While the lips and the throat chanted physically, the mind chants it intellectually, and the feelings chant it in a language of higher emotions.Thus the threefold chant of this sacred syllable brings you to that unison and oneness with the All, the LIGHT. This was the method which they adopted. I must tell you why this Mantram has inspiration or God - consciousness dependent upon these little sounds.
Is God a respecter of words ?
This is the question that comes to the mind of everybody. This OHM is the most natural and real name of the Holy of Holies, and for the ALL.
Another man came with this question: " What is your attitude towards the Vedas ? What do you think of them ? "
Rama says, "We approach the Vedas in the same way that we approach Chemistry."
"Do you believe in the Vedas ?"
Rama says, "I know the Vedas. I recommend them to you."
"Shall we regard the Vedas in the same way as we do the Bible ?"
Rama says, "You are making a wreck of the Bible. Do not approach the Vedas in the same way; approach the Vedas as you approach a work on Astronomy or Chemistry. Do not believe in everything implicitly, with a blind faith."
Rama says, "As you take up a book on Chemistry, you do not believe in the results of Chemistry because they are laid down by Lavoiser or by Liebig; do not take these things on authority; a faith that is founded on authority is no faith. Try the experiments yourself; verify them yourself and approach them in a true scientific way, not selling your independence, keeping your own freedom; read them in this way, and then alone will you be able to enter into the spirit of the Vedas, otherwise you will always miss the point.The teaching in the Vedas is not afraid of any criticism, of any questions or doubts. Let all your Western Science examine them; let your Western light (light always comes from the East you remember, but suppose this is Western light), come with its startling rays and let a flood of this light bathe the fairy face of the Shruti; there is not a single dark spot, there is not a single black mole to be found on the fairy face of the Shruti, The Vedas are not in conflict with Science; your present day discoveries and inventions are simply washing the feet of the queen of Shrutis. They are serving the cause of the Vedanta more and more. "
" All the people who have studied the Vedas with an unprejudiced mind have paid their tribute unto them. Schopenhauer,a philosopher who was never prone to praise any other philosophy, who poured forth all sorts of abusive language on all the philosophies but his own, when speaking of the Vedas says, ―In the whole world there is no study so beneficial and so elevating as that of the Upanishads (Vedas). It has been the solace of my life; it will be the solace of my death."
" I have been a Professor of Higher Mathematics in a University. I have been lecturing on dynamics, analytical hydrostatics, astronomy, trigonometry, and through reading the Vedas I find frequent references to the positions of the stars and constellations in the heavens in those days. The marking of the positions of Orion and other constellations in those days is given in the Vedas, and then making mathematical calculations, I give you the internal evidence, scientific and mathematical, of the fact that these Vedas were written, at least some of them, eight thousand years before Christ. "
Posted by Pradeep Singh at 2:23 PM

Email ThisBlogThis!Share to TwitterShare to FacebookShare to Pinterest
Labels: VEDAS