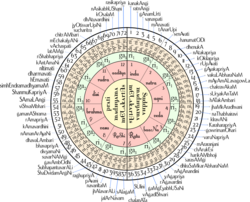 Following verse found in Śaṅkaravarman's Sadratnamāla explains the mechanism of the system.[7][8]

Translation: na (न), nya (ञ) and a (अ)-s, i.e., vowels represent zero. The nine integers are represented by consonant group beginning with ka, ṭa, pa, ya. In a conjunct consonant, the last of the consonants alone will count. A consonant without vowel is to be ignored.
Explanation: The assignment of letters to the numerals are as per the following arrangement.

The “ka-ta-pa-ya-di” rule used by ancient Indian mathematicians and grammarians is a tool to map names to numbers. Writing the consonants of the sanskrit alphabet as four groups with “Ka, Ta, Pa, Ya” as the begining letters of the groups we get

Each letter of the group is numbered from 1 through 9 and 0 for the tenth letter. Thus, ka is 1, sa is 7, ma is 5, na is 0 and so on. So to indicate the number 356 for example one would try and come up with a word involving the third, fifth and sixth letters of the groups like “gaNitam” or “lESaca”.
However, in the Indian tradition, the digits of a number are written left to right in the increasing order of their place value – exactly opposite the way we are used to writing in the western way. Therefore 356 would be indicated using letters in the 6th, 5th, and 3rd positions of the group e.g. “triSUlaM”.
Here is an actual verse of spiritual content, as well as secular mathematical significance:
“gopi bhagya madhuvrata
srngiso dadhi sandhiga
khala jivita khatava
gala hala rasandara”
The translation is as follows: “O Lord anointed with the yoghurt of the milkmaids’ worship (Krishna), O savior of the fallen, O master of Shiva, please protect me.”
Vowels make no difference and it is left to the author to select a particular consonant or vowel at each step. This great latitude allows one to bring about additional meanings of his choice. For example kapa, tapa, papa, and yapa all mean 11.
Now the interesting fact is that when you start numbering the consonants with the respective numbers from go = 3, pi = 1, bha =4 , ya = 1 , ma = 5 , duv = 9 and so on. you will end with the number 31415926535897932384626433832792.
This is the decimal equivalent of the ratio of the circumference of a circle to its diameter, Which you IS “pi”. The above number gives the accurate value of pi/10 correct to 31 decimal places.
Also not only did the code give pi up to 32 decimal places , but there was a secret Master key within the patterning of the 32 that could unlock the next 32 decimals of the pi, and so on. A trick to infinity.
The Code not only praised Krishna, it operated on another level as a dedication to Lord Shankara or Shiva.
In 825 AD one Arab mathematician
said: “This value has been given by the Hindus [Indians]”
Another amazing fact is that…
Shanu A. from Kerela has recently entered the Guiness Book of Records for his feat of memorising the value of Pi upto 50,000 places. He says he has been inspired by the Vedic numerical code which he used to memorise the entire value of Pi. He used the Vedic Numerical Code innovatively as a peg system and improvised on it. That was his secret.

Posted by Pradeep Singh at 3:38 PM